The Kanchenjunga Base Camp Trek is one of the remotest treks in Nepal. It has multiple options of both North and South Base Camps as well as numerous side trips.

The south basecamp trek can be accomplished in about 2 weeks, and the trails are far easier to trek than the north basecamp.

The area is inhibited by the local Rai, Limbu and Sherpa peoples famous for Tongba, a fermented millet drink that is definitely an acquired taste, and cardamom which is grown locally. Major villages visited on the trail are Yamphuding, and Mamangkhe where the local cultural center is worth to visit. Thorpu village on the lower section is also worth a visit, as the locals are known for their authentic, and generous hospitality.

Accommodation on the trek is very basic and at higher altitudes small stone huts, which are only open at peak times make camping a reasonable choice. Here is a sample itinerary of the Kanchenjunga South Base Camp Trek.

A couple of options for trekkers to take you even farther off the beaten track are listed below.

If you wish, we could organise to trek past the Kanchenjunga South Base Camp, and continue up the Simbuwa Khola valley to Oktang where the views of Kanchenjunga’s West Face and Gapur I, II, III and IV are out of this world. It is even possible to continue on to the Yalung glacier basecamp if additional equipment necessary to safely traverse the glacier is carried. 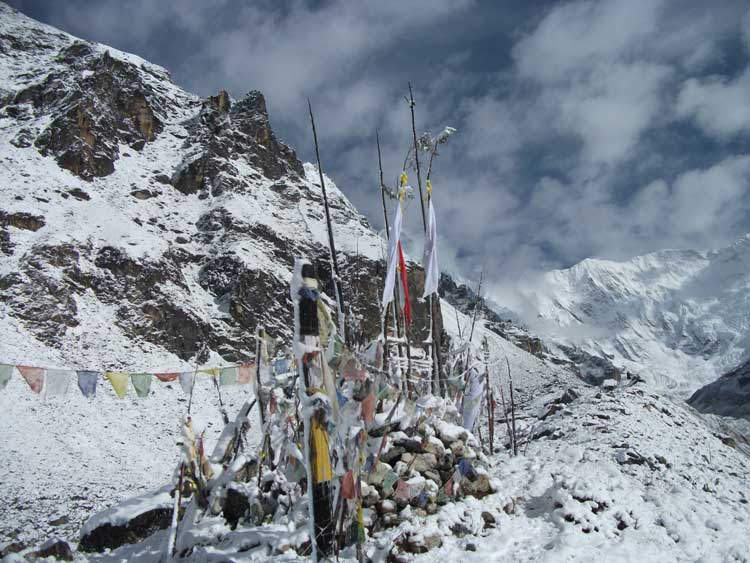 Pangpema is from the local Sherpa language and is the alternative name for the Kanchenjunga north basecamp. Pangpema is truly one of the national treasures of Nepal. It is a large grassy plane, fenced by glaciers and surrounded by the incredible peaks of the Kanchenjunga range. This area begs to be explored and we spend a couple of days there.

The nearest village is Ghunsa, which is the most developed and has quite cozy accommodation. People often claim to have spotted snow leopards on the trail below Ghunsa, especially toward Sele Le Pass.

The trail above Ghunsa toward Pangpema is prone to landslides so listen to your trek leader and hurry across any areas, which are dangerous. Encounters during the climbing season in April to May you might meet expeditions ascending Jannu Peak but this is rare. Basecamp at Kanchenjunga during this time will most likely have expeditions attempting the peak.

Options on this trek are an ascent of Peak 5950. This will add a couple of days to your trip but as Peak 5950 is not listed under the Nepalese Mountain Association there are no peak fees. The exact height has not been measured but it is most likely a 6000 m peask. It is also a non-technical summit, so basic mountaineering equipment and skills will get you safely to the summit where photos make the extra effort worth it.

As with the south basecamp trek, accommodation is very basic and, at higher altitudes small stone huts, which are only open at peak times make camping a reasonable choice. There are always good flat aerie’s to pitch your tent.

Here is sample itinerary of the Kanchenjunga north basecamp trek. 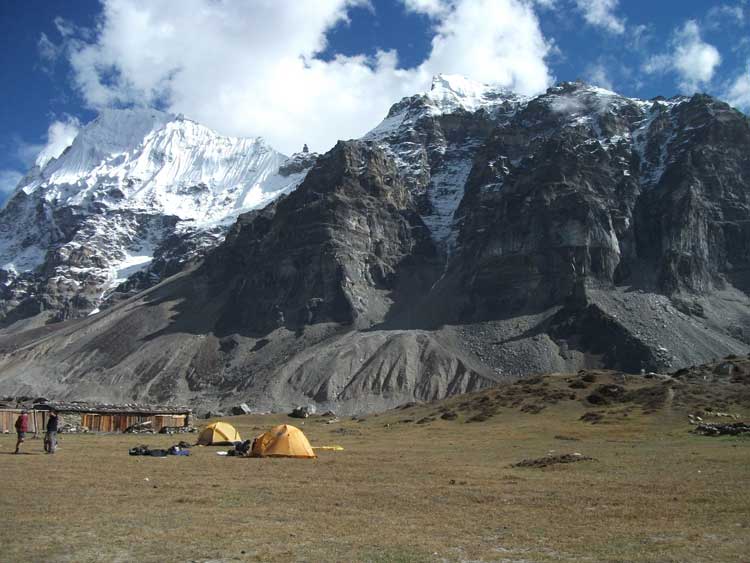 It is highly recommend that you attempt the Kanchenjunga Circuit Trek covering both basecamps, but if you cannot manage the extra time needed then you can shorten the trip but only trekking to either Kanchenjunga South Basecamp or Kanchenjunga North Basecamp.